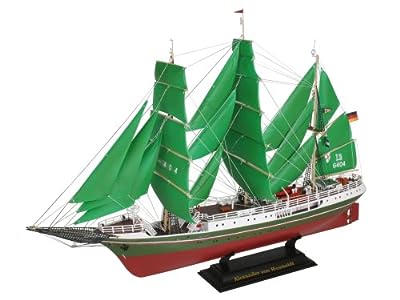 Originally ordered and launched in 1906, the Reserve Sonderburg was purchased in 1986 by the DSST (German Sail Training Foundation) and converted into a tall ship with distinctive green coloured sails and painted hull. Re-named the Alexander von Humboldt, after the famous German explorer, she was re-launched in 1988 and used as a sail trainer for some years before being converted into a floating hotel. Revells detailed model recreates this famous ship in all its glory, with full sails and display stand.